Types of Mold & How They are Affecting Your Home

Mold is present all around us. Some forms pose no threat to humans, while others — like the dreaded black mold — can cause serious health effects like chronic fatigue or coughing. As a homeowner, it’s essential to always be on the lookout for mold to protect the health of you and your family, as well as to avoid costly mold removal. Always check for mold in your bathrooms, cellars and other moist places, and make sure your home is well-ventilated with controlled humidity levels.

Mold is known to most commonly travel through the air. In the windy city of Chicago, IL, mold checks and the ability to identify different types of mold are more important than ever.

Types of Mold and How to Identify Them

Mold comes in a variety of colors and varieties and can be present in almost every space of your home. Five common types of mold you may find include: 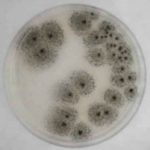 Aspergillus: With a black or green ground pepper-like appearance, you can often find aspergillus around toilets, painted surfaces or around air ducts. If inhaled, Aspergillus can cause allergic reactions that cause asthma attacks, fever, and a mucus cough. These commonly found molds should be checked for frequently. If you are unsure about any of these molds in your home, please call ServiceMaster of Lincoln Park right away. 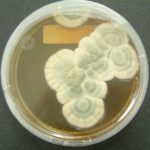 Penicillium: This is a fuzzy green-blue or yellow fuzzy mold with a musty smell often found on water-damaged carpets and wallpaper, or decaying matter such as spoiled food or plants. Penicillium is a hard mold to identify and can often only be done so by a professional. Even then, they will most likely have to take a sample and have it tested for confirmation. This mold is known as a respiratory irritant and can cause sinus infections, pneumonia, and more. 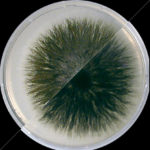 Alternaria: Alternaria is black with a velvet-like texture. Although it is a common type of outdoor mold, it is easily airborne, traveling for a warm, wet place to multiply. This is when it will cause an issue for your home. It will cling to plants, furniture, and in damp areas like under sinks, showers or window frames. The health risks of this mold include a runny nose, sore throat, hives and rashes on the skin. Babies and those with asthma should be especially careful around this mold. 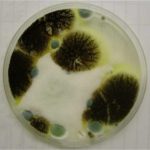 Cladosporium: Cladosporium is an olive or black color and found in wood and textiles. This is another mold that is more commonly seen outside, although it can also find its way into your home. Attaching itself to damp areas of the home like the basement, attic, and bathrooms. Similar to other molds, it can cause allergic reactions like watery or itchy eyes, coughing, sneezing, and other common cold symptoms. 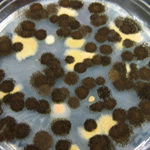 Stachybotrys: The ever-feared and dangerous black mold, Stachybotrys has a greenish-black appearance and can be wet or dry depending on the available moisture. This mold often comes with more serious health effects and needs to be treated by a professional as soon as possible

Some mold types can produce minor health effects like allergy symptoms, while others are highly toxic to humans. Aspergillus and Penicillium have minor effects similar to allergies, including red, watery eyes, rashes, and sore throat. Cladosporium has slightly more uncomfortable side effects including hay fever and asthma symptoms.

The most dangerous form of mold is Stachybotrys, also known as black mold, which can cause:

Implementing consistent home checks in places like the bathroom, attic, and basement can help to catch the growth of mold before a loved one begins to feel these symptoms. Have a professional mold expert, like ServiceMaster of Lincoln Park, come into your home when an outbreak of mold is found. An expert will know how to tackle the issue so it does not return.

Places to Check for Water Damage

Water penetration can occur anywhere in your home. In addition to the bathroom and basement, to avoid extensive damages and mold growth, it’s important always to be looking at the following areas for the signs of water damage:

How to Dry Out Walls

To dry out walls in your home that have been affected by water damage, you’ll want to visit your local hardware store and rent a fan or dehumidifier that generates temperatures of at least 115 degrees Fahrenheit at 14 percent humidity. Make sure the room is airtight by taping plastic to all windows and doors, then set up your rented equipment. Drying out a room typically takes about three days. If you do not know how long the area has been damp, taking a look under the drywall to be sure no mold has started growing will give you peace of mind moving forward.

The Mold and Water Damage Experts at ServiceMaster of Lincoln Park, Chicago

At ServiceMaster of Lincoln Park, we pride ourselves on offering fast and friendly mold removal and water cleanup services to all of the residents of the Chicago, IL, area. We’ve been trusted to help homeowners clean their homes and remove mold for more than 50 years and pride ourselves on doing your job right the first time. We also offer emergency 24-hour services, so you’re not displaced for too long. For your cleanup needs, give us a call today at 733-346-6767 or complete our online contact form.