A burst water pipe can quickly become an expensive cleanup and repair if left unchecked. While there are some steps you can take to prevent pipe bursts, sometimes life surprises you. If you're confronted with water damage and broken pipes, here are the steps you should follow to limit commercial water damage and cleanup.

What Causes a Busted Water Pipe?

If you see water damage from broken pipes, you'll want to look for the cause. Spending money on commercial water remediation is essential once pipes burst, but you need to understand why your pipes burst in the first place so you can prevent it from happening again. There are several reasons your commercial building's lines may have failed, including:

Clogs are one of the leading causes of water pressure problems in pipes. If a pipe gets blocked, the water pressure builds up inside. Eventually, the pipes will burst due to the force of the water, sending water all over your building. The water will cause significant damage to your space, and the strength of the pipes bursting can damage pipes, faucets, toilets and fixtures.

When temperatures are above freezing, water can freely move through your pipes. However, once it becomes cold enough to freeze, your pipes might be in danger of bursting. When the water in your pipes freezes solid, it expands. This expansion strains the pipes and can cause them to burst at their weak points, which are typically the joints.

Corrosion is usually only a problem in older commercial buildings, as pipes used to be made from galvanized iron or copper. Over time, minerals inside the water wear away the galvanized coating on these older pipes. Once this coating is gone, the pipe metal begins to rust. When the rust becomes too extensive or concentrated, the pipes fail. 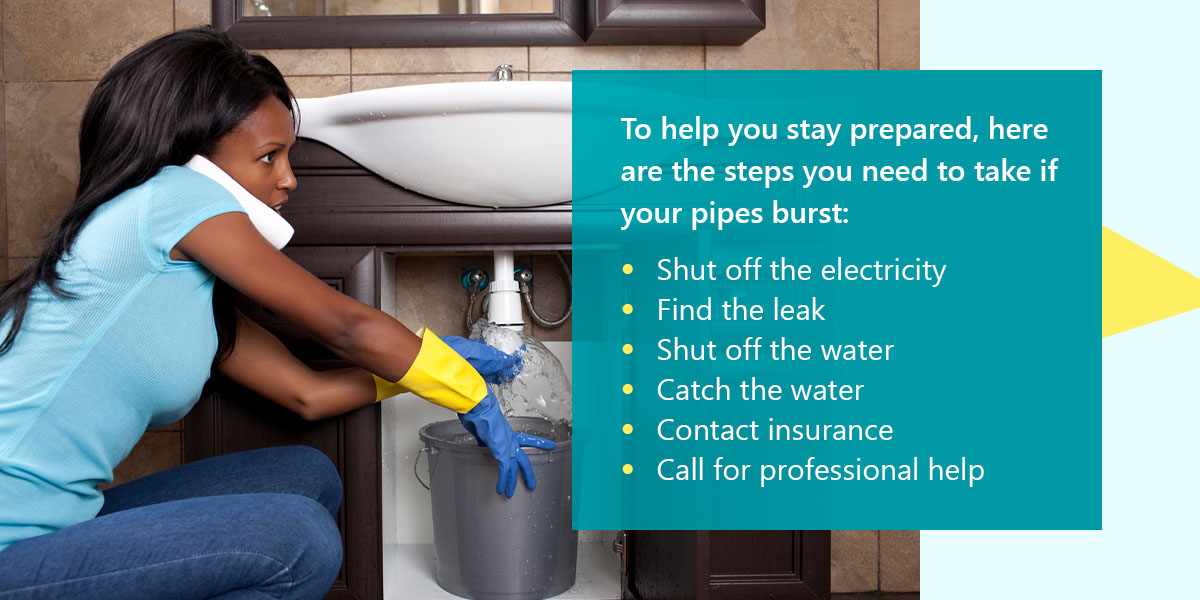 You'll need to act quickly if you've found yourself with burst pipes and some severe water leakage. The faster you respond to the damage and reach out for help, the sooner you can get everything fixed, and the less expensive the job will be. You should have a plan in place so that you know exactly what to do in the event of commercial water damage.

To help you stay prepared, here are the steps you need to take if your pipes burst:

How to Prevent Pipes From Bursting

Whether your pipes recently burst and you want to avoid it happening again, or you want to make sure you catch problems before leaks happen, there are steps you can take. Here are some preventative measures to help protect your pipes and business from future issues: 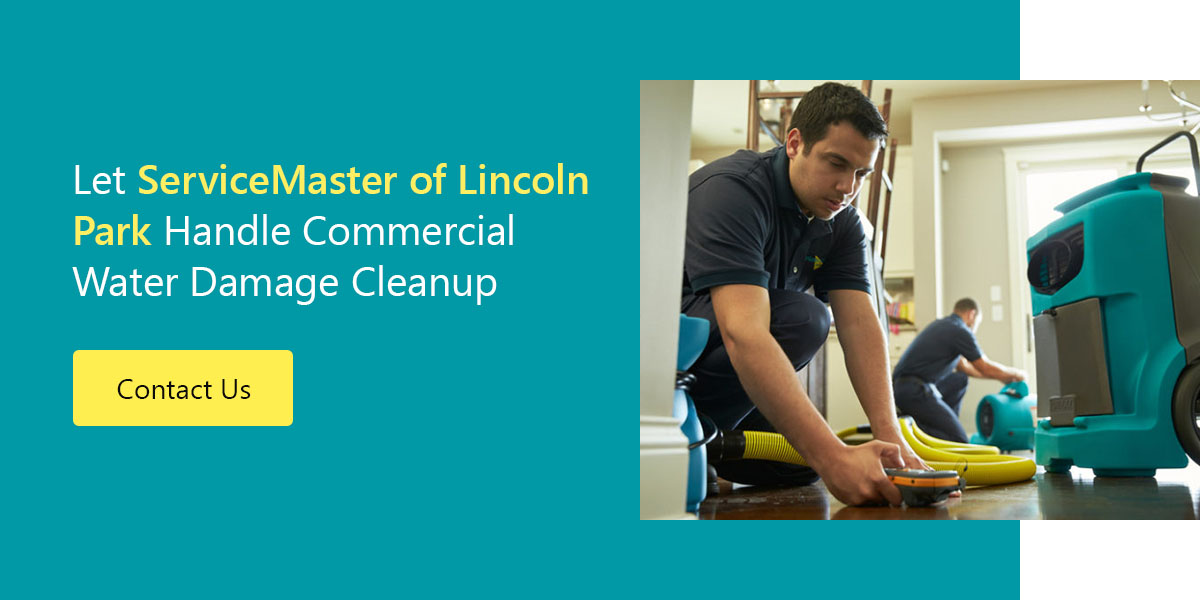 A burst pipe can happen at any time, catching you off guard and temporarily putting your business out of commission. If you want quick, effective commercial water damage response, turn to ServiceMaster of Lincoln Park.

We offer 24/7 response services — no matter when you call us, we'll send our expert team to evaluate, clean, sanitize and deodorize the affected area. We have the training and equipment to safely restore your commercial building and reduce your losses.

If you're in Chicago, Illinois, and need water, fire or mold remediation, contact us today.

DON’T KNOW WHAT TO DO NEXT? WE DO.

ServiceMaster of Lincoln Park
4.7
Based on 15 reviews
review us on

ELIZABETH HAYDUK
20:29 21 Jul 21
This ServiceMaster team was very well managed, effective and pleasant in a time that is difficult for a homeowner. In... my case, they went above the call of duty moving a significant amount of contents stored in the water damaged area.read more

Candy Haan
16:52 04 Sep 20
Service Master scheduled an in-home visit within 24 hours, came and did an infrared and moisture meter analysis and... provided me with on the spot results. They were professional and courteous and I highly recommend them.read more

Lori Alexander
15:59 09 Dec 19
ServiceMaster was fantastic to work with. They were prompt, courteous and got the job done efficiently. I would... definitely work with them again!read more

Andrew Pincus
13:49 17 Oct 19
Dan and team responded quickly to our water damage and offered us a more practical approach than another vendor. The... machines arrived next day and the drying worked as expected. Dan was responsive to our questions and walked us through each step in the process.read more

Samspring Spring
03:03 27 Jul 19
I recommend ServiceMaster of lincoln park to everyone. I had a water damage in my basement and Dan responded to my call... quickly. He inspected the damage and provided the estimate the same day. The crews came out to do the work, and they were very professional doing the water mitigation in my basement. Thank you all for the great job.well done!read more

S Valentino
17:21 23 Jul 19
I would not give this company SERVICE MASTER OF LINCOLN PARK even 1 star. Their idea if cleaning a wood floor was to... MOP THE FLOOR. When they came out for an estimate they said they CLEANED FLOORS not ran a mop over the floor. When I said you can’t just mop the man said well they don’t scrub floors!!! That’s so ridiculous! I am so upset at their false promise of cleaning. This same man who came out for the estimate saw paint splatters on the floor and I told him they were new. He didn’t say anything about not being able (or the fact they they don’t WORK at getting them out).But when they came to do the job he said his boss told him not to do anything but mop the floor and that won’t get the paint off. MOPPING ALSO IS NOT CLEANING THE FLOOR ...ITS JUST MOVING DIRTY WATER AROUND. Worst case of misrepresentation of work that I have ever seen. The part of the floor that they ran their dirty mop over isn’t even remotely clean. But they are not bashful about charging an arm and a leg.They advertise that people should have this “cleaning” done every so often to get their floors really clean. THIS IS THEIR IDEA OF REALLY CLEAN! Swishing a dirty mop over the floor!!!! I asked them to leave. Now I am in a terrible situation with one day left before I have someone move in. I hope this review will help someone else not get duped into hiring them!read more

Sharon Lee
18:51 01 Feb 19
I had the most awesome experience with Service Master of Lincoln Park, David and Andrew were wonderful!! They made the... devastating stress of my water damage so much easier to get through. They went above and beyond in their help and kept me sane! I am an Insurance Agent that has recommended Service Masters to my clients for many years and have always had good feedback from clients. The professionalism and kindness by David and Andrew was outstanding. I very much appreciate all that you do!read more
See All Reviews