Any city that sits on a lake and features rivers running through its neighborhoods will experience flooding on occasion — and Chicago is no different. Even in 2019, Chicago experienced somewhat severe flooding that swamped neighborhoods after heavy rain. The Chicago River is certainly a blessing to the area, but it can pose a threat when it reaches flood stage.

It’s important for residents in and around Chicago to understand what they are dealing with when it comes to severe flooding. When flood waters start to rise after heavy rain, Chicagoans need to take action to leave the area and keep themselves and their loved ones safe. If you live in Chicago and want to know which neighborhoods are most at-risk, here’s a look at the data. 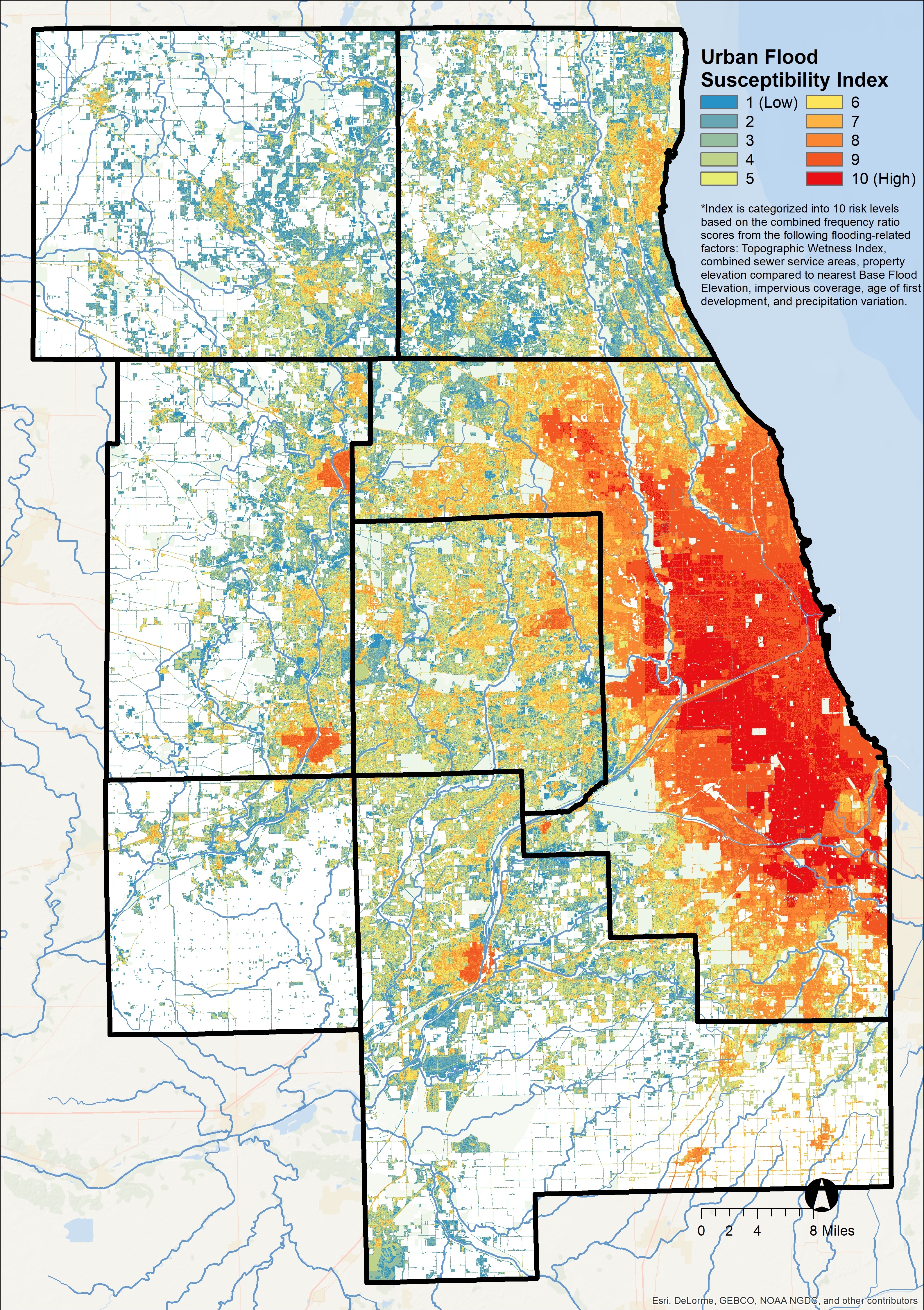 What Is a Flood Susceptibility Map?

Flood risk ignorance is responsible for nearly 40% of flood damage. So, understanding where floods will have the biggest impact is the first step to mitigating the risk. With tools like flood susceptibility maps, government officials and citizens can better understand which areas are more vulnerable to rising water and how to potentially lessen the damage when harsh weather hits.

Flood susceptibility maps are created based on land characteristics that may lead to a higher probability of flooding. These risk factors include land cover, distance to water, slope, elevation, soil drainage and more. Flood risk maps also use flood characteristics such as water level and frequency based on past events to determine which areas of the land will be more vulnerable in the future. These maps are often updated as the land evolves and weather patterns change.

While these susceptibility maps aren't in real-time, they are still invaluable for the preparation and prevention of extreme damage during heavy rain. Government officials can use them to increase public awareness and alert residents when they may be impacted. This system allows for time to evacuate or take the necessary precautions to prepare. These maps can also be used outside of emergencies to provide information for land use, the creation of insurance plans and the development of urban areas.

What Are the Types of Floods?

The area you live in determines your risk for flooding and the different kinds of floods that may occur. Understanding these floods is also vitally important to your safety, as you will know how they are caused and the impact they can have on a region.

The three main types of floods that you should be aware of include:

Typically, this kind of flooding is more common around larger rivers in areas with a wetter climate and is usually caused by excessive rain or melting snow. They occur when a river's water level overflows into the surrounding shores. To predict the probability of this flood in an area, flood risk mapping looks at forecasted precipitation, past precipitation, river levels and soil/terrain quality.

A flash flood results from excessive rainfall that causes a significant increase in the water height of a typically dry, elevated area in a short amount of time. These kinds of floods can happen anywhere — even in areas where water isn't present. Flash flooding is more common in locations with rocky terrain due to its lack of soil and vegetation, which prevents the rain from draining into the ground.

A coastal flood can occur when high winds forcefully push water onshore, usually during high tides. This flooding, known as a storm surge, affects lower land areas and causes extreme damage in some cases. In addition to the topography surrounding the area, the intensity of the storm plays a role in estimating the probability and magnitude of a storm surge in your area.

Another type of coastal flooding is a tsunami, which is a series of massive waves.

The Chicago Metropolitan Agency for Planning (or CMAP) uses an urban flood susceptibility index to rate the likelihood of flooding in different parts of the city. You can see the city mapped by index color, which shows most of Chicago south of Evanston and closer to Lake Michigan experiencing the greatest risk. South Side neighborhoods located near where the Chicago River heads southwest along I-55 and down toward Lake Calumet and the Calumet River are most at risk. Those neighborhoods include:

According to CMAP’s maps, the areas on Chicago’s western edge are least at-risk for flooding. However, the flood risk in those areas still exists, so it’s important for residents to remain vigilant during extreme weather. If and when there’s the threat of flooding in your neighborhood, stay tuned to the news and listen to local authorities as they make recommendations on how residents in the area should respond. It is important to be proactive and prepared for flooding. At ServiceMaster, we have seen too many devastating situations after a large flood. Keep your Chicago home safe by making sure your flood insurance covers everything you need it to, check your sump pump regularly, and keep your gutters clear in high rain seasons like spring and fall.

When You Experience Water Damage from a Flood, Call the Best Water Restoration Expert in Chicago

At ServiceMaster of Lincoln Park, we help homes and businesses return to their previous condition after flooding and other causes of water damage. We bring peace of mind amid difficult situations, and we help get people’s lives back to normal.

There are all kinds of flooding situations and water damage, and each requires a different type of response for restoration. That’s why we choose to offer comprehensive flood damage restoration services, including:

We understand that water damage doesn’t happen on a schedule, so we’re available 24 hours a day and seven days a week to provide service at your home or business. Flooding and water damage are urgent situations, and we respond with the urgency those situations demand. Because of our rapid response, we’re often able to fully restore flooring, walls and personal property.

Contact us today to learn more about how we can help after heavy rain brings the Chicago River to flood stage.

DON’T KNOW WHAT TO DO NEXT? WE DO.

ServiceMaster of Lincoln Park
4.7
Based on 15 reviews
review us on

ELIZABETH HAYDUK
20:29 21 Jul 21
This ServiceMaster team was very well managed, effective and pleasant in a time that is difficult for a homeowner. In... my case, they went above the call of duty moving a significant amount of contents stored in the water damaged area.read more

Candy Haan
16:52 04 Sep 20
Service Master scheduled an in-home visit within 24 hours, came and did an infrared and moisture meter analysis and... provided me with on the spot results. They were professional and courteous and I highly recommend them.read more

Lori Alexander
15:59 09 Dec 19
ServiceMaster was fantastic to work with. They were prompt, courteous and got the job done efficiently. I would... definitely work with them again!read more

Andrew Pincus
13:49 17 Oct 19
Dan and team responded quickly to our water damage and offered us a more practical approach than another vendor. The... machines arrived next day and the drying worked as expected. Dan was responsive to our questions and walked us through each step in the process.read more

Samspring Spring
03:03 27 Jul 19
I recommend ServiceMaster of lincoln park to everyone. I had a water damage in my basement and Dan responded to my call... quickly. He inspected the damage and provided the estimate the same day. The crews came out to do the work, and they were very professional doing the water mitigation in my basement. Thank you all for the great job.well done!read more

S Valentino
17:21 23 Jul 19
I would not give this company SERVICE MASTER OF LINCOLN PARK even 1 star. Their idea if cleaning a wood floor was to... MOP THE FLOOR. When they came out for an estimate they said they CLEANED FLOORS not ran a mop over the floor. When I said you can’t just mop the man said well they don’t scrub floors!!! That’s so ridiculous! I am so upset at their false promise of cleaning. This same man who came out for the estimate saw paint splatters on the floor and I told him they were new. He didn’t say anything about not being able (or the fact they they don’t WORK at getting them out).But when they came to do the job he said his boss told him not to do anything but mop the floor and that won’t get the paint off. MOPPING ALSO IS NOT CLEANING THE FLOOR ...ITS JUST MOVING DIRTY WATER AROUND. Worst case of misrepresentation of work that I have ever seen. The part of the floor that they ran their dirty mop over isn’t even remotely clean. But they are not bashful about charging an arm and a leg.They advertise that people should have this “cleaning” done every so often to get their floors really clean. THIS IS THEIR IDEA OF REALLY CLEAN! Swishing a dirty mop over the floor!!!! I asked them to leave. Now I am in a terrible situation with one day left before I have someone move in. I hope this review will help someone else not get duped into hiring them!read more

Sharon Lee
18:51 01 Feb 19
I had the most awesome experience with Service Master of Lincoln Park, David and Andrew were wonderful!! They made the... devastating stress of my water damage so much easier to get through. They went above and beyond in their help and kept me sane! I am an Insurance Agent that has recommended Service Masters to my clients for many years and have always had good feedback from clients. The professionalism and kindness by David and Andrew was outstanding. I very much appreciate all that you do!read more
See All Reviews